skip to main | skip to sidebar

A combination of Dita von Teese, Isabella Blow tributes and a global recession that's left people looking back to days gone by have helped reintroduce a touch of class known as the hat. And thank goodness, because it gives people all the more reason to talk about great creative minds like Justin Smith.

Justin's bespoke millinery line, J Smith Esquire, fuses tried-and-tested detailing with modern shapes, and I would love to see the piece pictured below out on the streets. Stephen Jones is a fan of the range, and that iD styling award pretty much speaks for itself.

What's most surprising? Justin only finished his millinery course in 2005. I guess becoming creative director of Toni & Guy was time-consuming.

Here, Justin shares how it all took shape with the Fash Pack. 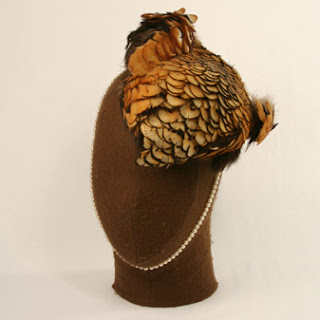 What made you get into hats from hairstyling, and what reaction did people give you when you announced your switch?
I used to do lots of avant-garde shows with the hairdressing, so it was quite a natural step. I went on a millinery course to help me with the avant-garde hair, and I had no call to do collections anymore as I left Toni & Guy (who I used to do them for).

I have always had a hat obsession, but never thought about doing it as a career till I started - then there was no turning back!

What's the best piece you've designed so far?
Many are my favourite. It’s the process I like the most, but if I had to choose one it would be the tattooed top hat for my graduation. I am thinking about this one as I have just made another for the Stephen Jones exhibition at the V&A.

Name someone whose work you wish you designed.
Thierry Mugler's. Jean-paul Goude's.

Which designer or company would you love to collaborate with?
I would love to have worked with Thierry Mugler, guess its too late now! [Ed. Note: Good luck stealing him back from Beyonce.] Let’s see who comes along. I would love to work with Jean-Paul Goude.

What's something you wish you knew earlier that might help designers just getting started?
All about the fashion industry! I had no idea when I left college, coming from a hairdressing background, so it was dropping myself right in the deep end.

Do you have any upcoming projects or shows you'd like to talk about?
Look out for the new collection. I’m showing on Saturday 21st, 9pm-10.30pm, Science Museum, second floor for On|Off. [It’s an] instalation show, not what you expect!
Posted by Jill at 12:52

How many people have accessed the Fash-Pack